In the beginning the weather only called for a 60% chance of rain, yes majority but not really enough to cause for alarm.  “Hurricane Isaac, Hurricane Isaac” was all anyone was talking about and Kentucky is no where near the coast Isaac’s origin.  So naturally I thought, ‘big deal.’

Continually checking the weather radar, I wanted to make sure that I was going to be prepared for whatever was going to hit because I had a full day of shooting marked on my calendar.  I looked up at the sky checking for the angry black clouds that were predicted to hit the Louisville area with 1-2 inches of rain, saw only mildly grey and packed up and headed to Evangel High School – much to my surprise when I got there around 12 noon (the time the soccer game was suppose to begin) I saw no one in the stands or near the field.

Had I missed something?  Had the threat of Isaac sent everyone running and I missed the memo?

I went and found the athletic director (also the head football coach) and asked if there was still a soccer game as scheduled – somewhat knowing the answer before I finished the question – it had been cancelled.  Woo hoo!  It was time that I got to head back home, eat, and edit some more before coming back out at 4:00 o’clock to see the Eagles of Evangel take on the Knights of Franklin Classical.

Well let me just tell you it was a good thing that I was able to go back home because I was in no way prepared for Isaac when he finally hit Louisville.  It had started to rain before I left the house, so I packed plenty of trash bags and rubber bands to wrap my camera with just in case the sprinkling wasn’t over by the time I reached my destination.  Soon enough the sprinkling turned into the heaviest rainfall I had seen in a long time.  At one point everyone was going 20 m.p.h. on the main road.

I started to think there was no way they would play in this – but then I remembered, football plays in anything, as long as there’s no lightning – yikes.  My camera was going to be protected fine, but what about me?  I brought a jacket that seemed water resistant.

Boy was I wrong.  I don’t think I could have picked a worse jacket – the darn thing seemed to retain water than resist.  It took all but five minutes of me shooting and I was soaked from head to toe.  10 minutes and I could feel water dripping down my back – how was that even possible?  I was wearing a hood!   Then, as a little tease, the rain stopped and the sun began to peak out… oh what little hope the crowd had that the umbrella time was up.  Incorrect.  Rain picked up just as heavy if not heavier in round two.  I had given up all hope to try to stay dry, all I cared about was making sure if I was standing out in the rain, I was at least going to get some good shots.

It really wasn’t that bad shooting in the rain, I think I was more shocked by my jacket failing me than anything else.  Santa, if you’re out there listening, I would like to request a water resistant or proof jacket to me for Christmas and then I will gladly shoot in the rain, or hurricane, any day. 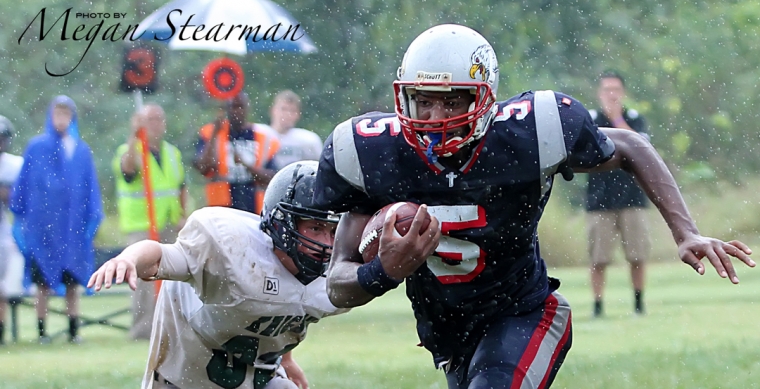 Kristiana - This post is hilarious and extremely accurate of ky vs. issac. I love the pics, the rain drops add an extra something…perhaps what you gave in dryness you added in art